Last week was half term (yes, already) and Grandma visited.  We didn’t do much but we had THE best week.  The one thing that we did do, however, was take a trip to the Luzern Transport Museum (LTM).  Steve and I took the children to this museum in the summer but the place is so massive we didn’t get around to seeing it all.  So, our mission was to visit the parts that we hadn’t got around to previously.

Off we set with our packed lunch – anything to save a bit of money, the LTM is not a cheap day out – taking the picturesque route through Kussnacht am Rigi and Meggen along the banks of Lake Luzern.  We arrived at the LTM within half an hour and duly paid the 9CHF parking charge (which is a bit of a swizz because the only parking options are 1, 2 or 9 hours!).  Entering the LTM we viewed the ticket options and decided a family ticket at 65CHF would be the best way to go.  We strode up to the counter and asked for said ticket,

“Oh.  Um.  Why not?  We are two adults and two children.” I replied, a little confused.  Now this is where Switzerland is still a little behind the times so bear with me.

“Yes,” replied the rather bored looking young man (I had a feeling he’d had this conversation before.) “but you aren’t two parents.”

“Yes.  If we allowed grandparents on the family ticket we’d have to allow aunts and uncles too and then where would it end?”

I know, I know.  So, slightly incredulously “Oh.  Seems a bit daft.”  To which I received a very curt,

“Well, that’s how we do it here.” I’m convinced that I heard a whisper on the air from the gentleman’s tone that said, ‘so, if you don’t like it, go back to where you came from.’

As I was rather confused about what ticket option we were allowed I did the tourist thing and asked for the cheapest entry for one adult, one adult over 65 and two children, one age 6 and one age 5.  Good news was that Joshua went free.  Bad news the total price was 75CHF!  Yep, 10CHF more expensive for three of us compared to paying for 4 on the family ticket.  Now, this is where Switzerland really bothers me.  It is home to many huge, global businesses and generates vast amounts of wealth.  So you’d expect it to be one of the most developed of developed countries.  And yet, it isn’t.    I think I’ll need a whole blog post to explore this but, for now, take entry to the LTM as an example.  A family ticket in the UK would, generally, allow entry for two adults (any relation) and 2 children, which takes into consideration the complex modern family dynamics.  There would also be concession rates for the over 65s and the under 12s or under 3s.  In Switzerland I have never seen an over 65 concession the rate though, in fairness, the under 6s do generally go free.  This leaves me with a sense of being resident in a country that is about 30 years behind the times.  It is unsettling and I still can’t process it.  Anyway, back to our trip to the LTM.

Having got over the entry farce (actually that’s a fib, I still haven’t got over it) we stepped into the first exhibition hall which is packed to bursting with all types of rail transport from steam locomotives and cogwheel trains to trams, and the air is heady with the scent of axel grease.  Having explored this area on our first trip during the summer we pushed on through; past the road exhibition hall which covers cars (mass produced and specialist), prams and bicycles which we’d also seen; across the courtyard, past the mini-railway, the go-kart track and mini-sailing pond before entering the air hangar. 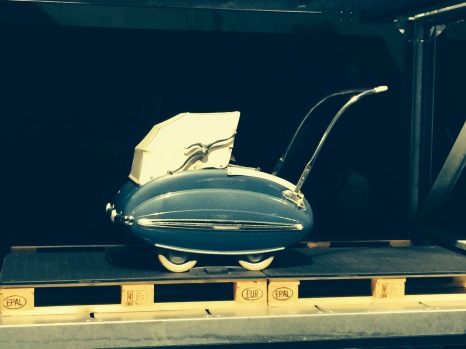 The great thing about the LTM is that it is more like a science museum, you get hands on with interactive learning and play.  The children were able to understand the science of a hot air balloon through a simple experiment and as an added bonus were able to see the living capsule from the successful round the world hot air balloon attempt.  They could imagine being a parachutist through a combination of a hanging platform and a TV screen – very clever but I have to say that Grandma and I both felt a bit queasy so had to get off rather promptly. 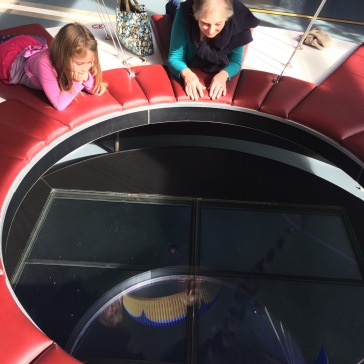 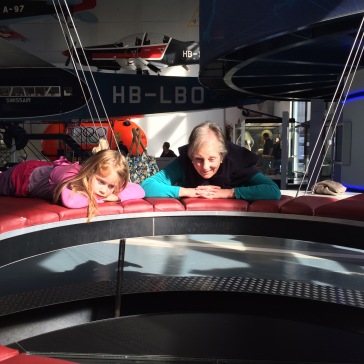 We boarded a real aircraft and were able to view the cockpit up front, the electrics in the floor and relax in the smoking lounge which is now, of course, non-smoking.  The children were able to abort a flight via the emergency slide, they could take charge of air traffic control and learn about Swiss involvement in aspects of aviation history.  Joshua was keen to have a go in the helicopter simulator where I had to ‘fly’ the craft, I’m please to report that we only crashed once.  The aircraft simulator will have to wait until Joshua has grown a bit – have to admit that I’m not too sorry about this as that’s the simulator that really moves. 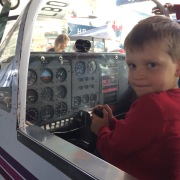 Finally, three floors up in the roof of the hangar we came across a small, but great display, on space with an interactive explanation about weightlessness, a rather primitive display that got over the concept of the distance between the moon and earth.  There were spacesuits on display, a film (in German) about the Swiss space program and footage of a rocket launch, and finally a mock up of part of the International Space Station.  The final frontier provided the perfect end to our exploration of aviation history.

On our first visit to the LTM we decided to go into the ‘Swiss Chocolate Adventure’ (at additional cost) which I have to say was very primitive and the total opposite to Cadbury World.  Basically a potted history of the discovery of cacao beans and the importation into Switzerland along with the history of Swiss chocolate making (special focus on Lindt who must have funded the exhibition) told through electric gondolas, large TV screens and handheld listening devices.  Steve managed to get his device stuck on Mandarin so I volunteered to change it back to English for him.  He duly passed the device back to me and our handover was as poor as the US relay team in the Beijing Olympics, the clatter of my listening device bouncing from the floor of the moving gondola to the  floor of the exhibition hall and reverberated for what seemed like forever.  It was lost, there was no way to get it back so I spent the rest of the ‘Adventure’ trying to understand any German word.  The good thing was that I did manage to get Steve’s device back into English and handed over with no repeat of the mishap.  In consolation for sitting through the dullest exhibition in the LTM you are rewarded with a free Lindor chocolate ball each.  Possibly the only thing in its favour.

With the completion of the Rail, Road and Air exhibitions surely now, on our second visit, we would get into the Sea exhibition?  But no, it wasn’t to be.  Time was ticking on, the children were getting tired and, very much like the child that leaves the toy to play with the cardboard box, ours were absorbed in loading and unloading wooden shapes from a mini cargo depot to a toy truck.  The Sea exhibition remains our final frontier and a third visit looks likely, we’d better save our francs for the next trip to this amazing place. 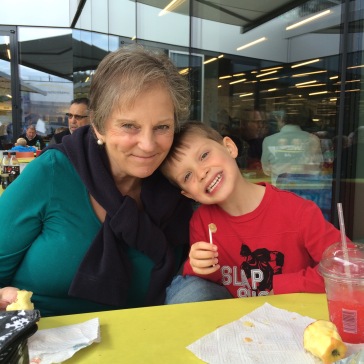 Disclaimer, all opinions given in this article are mine, I received no money in exchange for this review.  Prices are correct as at October 2014.

One thought on “Luzern Transport Museum”