Two short words which, in the true spirit of four letter ones, evoke a diverse range of emotions…

Not to be confused with the emotional rollercoaster that the combination of School, Summer and Holiday bring with them – along with the awesome power of reducing even the most hands on of hands on parents to a quivering, rocking wreck in the corner of the room.

Anyway ‘Half Term’ doesn’t quite have the same power as ‘School Summer Holidays’ but it does pose a multitude of challenges for the modern parent, does Jim get sent on a holiday course for the week so Mum and Dad can still work? Can Holly spend some quality time cementing inter-generational relationships with the grandparents – but can Louis and Fred join her too or is that perhaps a step too far for the blood pressure to cope with? Can we make it through half term without spending (at least) £100 a day on day trips? Is staying at home really an option or are the financial benefits far outweighed by the trauma of boredom, digital restriction, and yes the inevitable cooking with the children activity?

The Life of Ryrie Half Term was last week. The husband magically had an overseas work trip, despite the fact that the new job supposedly meant no overseas travel… weird how that happened isn’t it?! So, just me and the kids. Hey ho.

I won’t bore you with the minute details of the week, the tears, tantrums and bottles of wine consumed but I AM glad to report that we survived. We even had a few tears on returning to school this morning which is actually a scientific indicator of the enjoyment level of Half Term. Yay me, high fives all round, I made the kids cry – for a good reason. Whoop whoop. (Note – this has not always been the case, J cried when he started nursery… because he didn’t want to come home

. Tears this morning says A LOT about how far we have come).

Anyway, I digress, the thing about Half Term is that time suddenly goes haywire. Moments either stretch out like a Bear Yo Yo (other stretchy snacks are available) or disappear as fast as one is eaten, so you need activities to help combat the affects of time bending on your children. The one trip we took to help ease our way through the week was (and in fairness this was with Daddy on his return from his  work trip) to……. drum roooooollllllllllll..…… Bristol.

Yes. Yes. I know. I know how to show my kids a good time, right?

Bristol. The 8th most populous city in the UK (according to Wikipedia, so this could be a fake fact. Oooo, or perhaps a fackte or fakt, or fackt????). Bristol, the city with a maritime history that coined the phrase “shipshape and Bristol fashion’ but gained the dubious honour(?) of being a major player in the global slave trade. Bristol, the city that was practically obliterated during the Second World War courtesy of the German Luftwaffe, only to rise from the ashes less like a golden, flaming phoenix and more like a bald, blind, newborn canary. Bristol, the city that was discovered in recent years by The Creatives. The Creatives suddenly realised the ease with which they could escape the rat race of the UK’s Capital and benefit from the joys of the surrounding countryside courtesy of the Great Western Railway, they were lured by the beauty of Clifton Village, the stunning Avon Gorge and a few well placed, socially pertinent graffiti commentaries by Banksy. The Creatives took Bristol by the scruff of its neck, are giving it a damn good shake, and re-developing those ugly post-war high rises and pre-fabs, breathing new life into redundant docks and canal sides. Bristol is now one of the UKs hottest property hotspots. 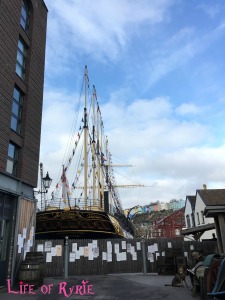 Bristol is also the home of Isambard Kingdom Brunel (and with a name like that he was most definitely destined for greatness) the creator of said Great Western Railway, the architect of the stunningly amazing Clifton Suspension Bridge and the source of our Half Term Trip. We went to explore SS Great Britain.

Yep, as I said, I know how to show my kids a good time.

SS Great Britain is the great-great-great-grandmummy (because all ships are female) of modern shipping and I know that this probably doesn’t strike you as being top of ‘Half Term Things to Do’ list but it was a fabulous, informative, interactive experience jam packed with knowledge nuggets to simulate even the most apathetic of minds. It was a revelation. 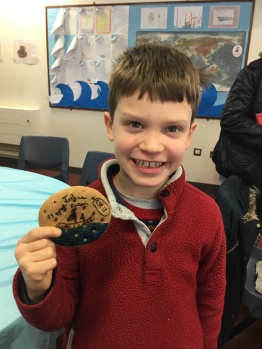 Why was it so good? Well, it was the attention to detail – the outside space looked like a film set, with posters advertising voyages to Australia, with rats (fake ones) and barrels and a real live Brunel walking round and answer questions from visitors. There was the ability to get hands on with the propellor, make up bunk beds in the cabins, even feel a little seasick on the great ship itself (truly a remarkable occurrence considering the ship is in dry dock!). The whole experience left you in no doubt as to the unbelievable discomfort of Steerage and the pure genius of Brunel’s engineering mastery. What’s more the pricing structure was a stroke of genius too – from family tickets (2 adults and up to 3 children for £37) to mini-grandparent family tickets (1 grandparent with up to 3 children for just £22*) AND the tickets can be re-used as many times as you like within one year of purchase. Incredible!

After the sensory and brain overload at SS Great Britain we headed over to the MShed. I have never been there before and we had an hour to kill before going for dinner. Oh my, that was another great experience. Located in a massive transit shed along the Princes Wharf with hulking steam cranes still in location on the harbourside, it is a space that should be the first port of call for any visitor to Bristol. With permanent exhibitions displaying, and explaining, much of Bristol’s history I learnt more about the city in that spare hour than I have done at any other time of my life. I have lived near Bristol pretty much forever and even went to primary school in one of its suburbs but I have never fully appreciated the depth of history in the place. Currently running alongside the history of Bristol exhibits there is the Wildlife Photographer of the Year Exhibition so I will be heading back and paying to marvel at these wonderful images – this exhibition runs until the 5th March 2017 and costs just £5 per adult to enter and children under 16 are free*.

All in all Bristol is a city of surprises, you have scratch below the surface of 50’s skyscrapers and the gloss of Cabot Circus to truly start understanding it. If you have never been I would heartily recommend that you put it near the top of your ’Half Term Things to Do’ list.

*Disclaimer: No money, goods or tickets have been given in exchange for this article. Prices are correct at the time of writing in February 2017.  All opinions expressed are my own.  If you would like me to review any product, place or thing, please get in touch…