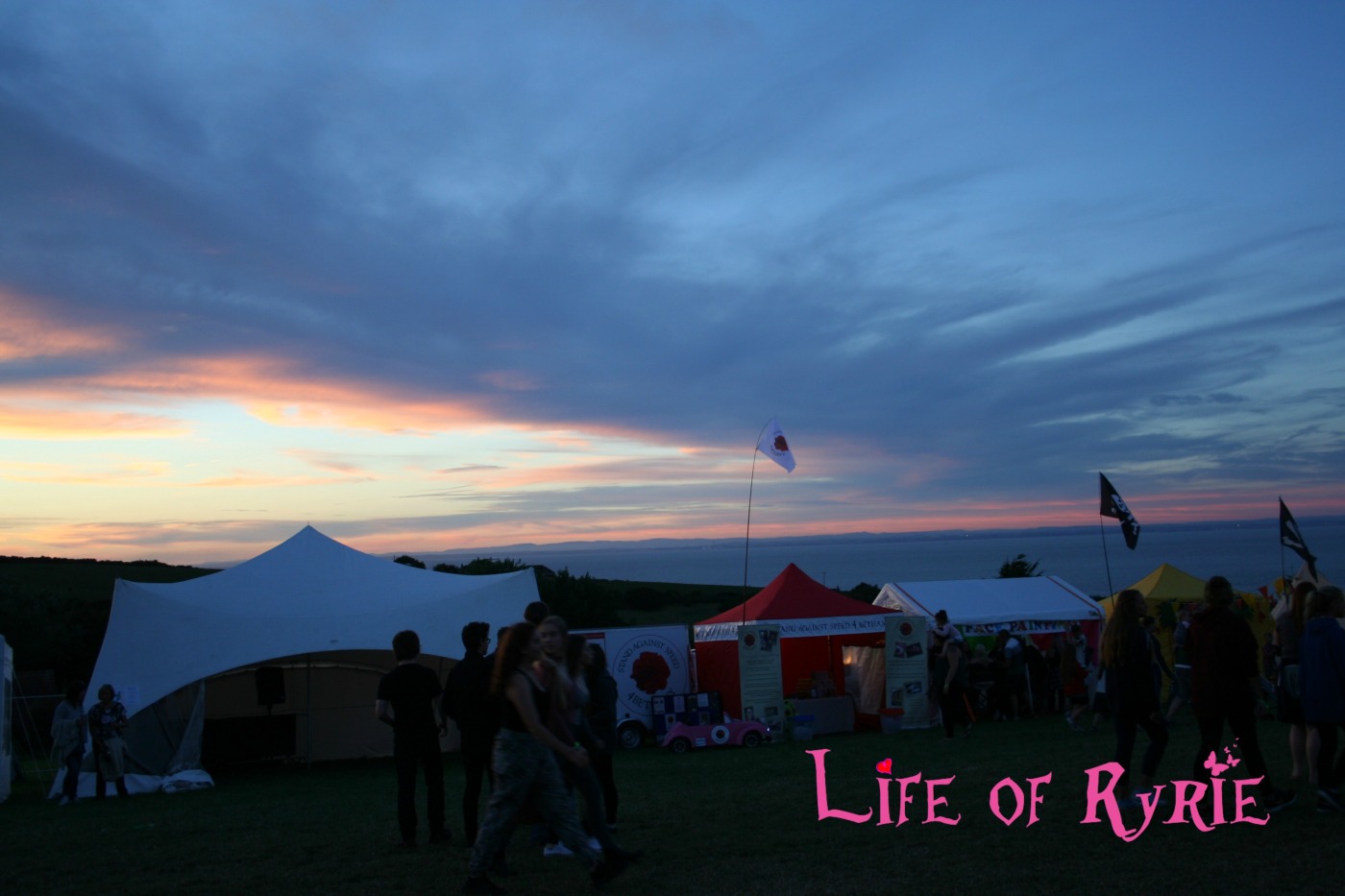 As I write this the rain is teeming down. I can see it drumming on the decking, dancing between the grooves and keeping up with the steady tempo of the dish washer whirring in the kitchen behind me. While I watch the rain fall I am smiling.

This time last week we were camping in a field on the Quantock Hills with some close friends and, thank goodness, it definitely wasn’t raining. We were at Watchet Music Festival and the sun was setting over Lundy Island and the English Channel. Flags were whipping along to the music above our heads and there was a seriously competitive game of Uno going on at our feet.

As Glastonbury Festival is the Mother of All Festivals I never particularly felt the need to frequent any of the other myriad of music festivals which are on the summer menu. So, when my friend suggested that we join forces and spend the August Bank Holiday weekend in a field, in a tent, in Somerset, with the children I was a bit blasé about it all. I went along with the ticket booking seeing it as a weekend for J to spend with his BFF (H) but then didn’t think too much else about it until we bought the tent and actually went camping. Then I panicked a teeny tiny bit (ok, a lot).

We arrived at Watchet, after a dreadfully slow journey, with the car positively bulging with stuff. All the stuff you think you are going to need and then a few extras for comfort even though in reality you only ever use a third of the stuff you pack. J was beside himself with excitement as he would soon be seeing H and spending the whole weekend with him. T on the other hand was quiet and a little withdrawn as she knew her main playmate (J) wouldn’t be wanting to play with her for the next three days. However, we got onto the site late morning and managed to get a brilliant pitch 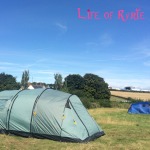 for our tent, which, by the way, we managed to erect in less than twenty minutes (I know, I know, we are officially experts!). H and his family joined us and after helping them complete our camp and experience a bit of chair envy, we all had a mug of tea in hand by 4pm – yes I know, ten years ago it would have been a beer, but hey, I have reached a landmark age you know!

That evening, and to the amusement of my friend, the headline band was UB40 (ha, ha, how ironic) so after our picnic tea we headed up to the main Festival site and took a look round. Watchet is a small festival, a capacity of around 4,000 and has a vista that is simply stunning in the late evening sunshine. The warm glow of the setting sun reflecting in the English Channel. We found the Lego tent, the kids craft tent (full of free activities), the Main stage (fairly obvious in the grand scheme of things), the Udder Stage and the Something Else Tea Tent, oh and the bar (whose prices were at the same level as the local pub so it wouldn’t break the bank having a couple of beers with mates while watching a decent band). Watchet Music Festival is an eclectic mix of well known bands (UB40, The Feeling and the awesome Levellers were this year’s headliners) and the brilliant but colloquial beat-box-meets-folk-meets-rock bands that have a small but loyal army of fans.

As always with adventures of this kind, the kids peaked early and the adults forgot that they had another night of relative freedom and went hard and fast on the red wine and rum. I don’t remember much of UB40’s set as I sat in my little green chair under the gazebo with Steve, Em and her husband (hmm, that’ll be the red, red wine then – ha ha ha). Though I do remember watching the lighting from the main stage reaching out in the night sky with a galaxy of stars shining above thinking how lovely it all was…

As Watchet is located on a small site it felt safe enough to give the children a certain amount of freedom, J and H could go to the Lego tent whilst T wandered off to the craft tent before returning with freshly painted nails and a homemade superhero cape. Saturday passed us by allowing us all the opportunity to kick back and relax. The children were happy. The adults were happy. Highlights from Saturday at the festival included Funke and The Two Tone Baby and Rews. Thanks to the excesses of the night before I missed the majority of The Feeling, crashing out, as I did, on my blow up mattress just three songs into their headline set.

Sunday announced its arrival with the sound of rain pattering on the tent and as my heart sank, the rain stopped. Sunday at Watchet is the fancy dress day and the one which the children had been looking forward to most of all. The theme this year was a fairly broad and all encompassing Comic Book Characters. J and H, after considerable and careful consideration, had agreed on Danger Mouse and Penfold whilst the rest of our group went for Super Girl, Robin, Bat Girl, The Joker, Kylo Ren, Captain Scarlet, Hawkeye and Minnie the Minx. Fancy dress is never something to be undertaken lightly, no matter how much ‘fun’ it is meant to be. If you get it wrong you will be ridiculed for years, get it right however and it ensures your acceptance to a group and good times all round. Thankfully we embraced the theme, there were no half hearted nods to it, and the consequence was an entertaining day. 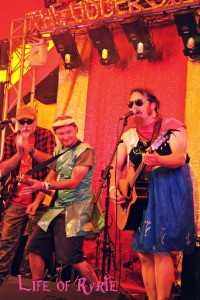 We got up onto the Festival site just in time for our delicious Sunday Roast pre-ordered from Nana’s Kitchen – the peas were the tastiest I think I have ever had! It was also the first time I have ever enjoyed a full roast dinner at a music festival, and an experience I would heartily recommend. The rain had started again and pelted down for the duration of our meal before being blown into the Channel, allowing the sun to gain dominance and work in co-operation with the wind to dry the site. Highlights from the Sunday included Gaz Brookfield, Beardy Keef’s Uke Jam and the sight of hairy, butch members of The Sweetchunks Band wandering around dressed as Frozen characters. I am sure that The Levellers would have been the highlight of the weekend but we sadly we left before they performed. 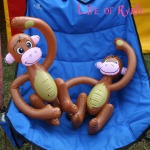 Watchet Music Fesitval is the perfect festival for first timers, or those with relatively young children. It is friendly bijoux and compact and the toilets were kept clean and stocked full of loo roll and hand sanitiser, what more could you possibly want? The real positive of this festival was the opportunity to spend time with friends, in the late summer sunshine with music (and the Lego tent) as the only distraction. We came away with great memories and, more importantly, a stronger friendship.

The weather may be seriously crap now but for the past six weeks we have been blessed. We have had a proper summer full of dry, hot days. We have memories of camping and other family adventures in warmth that has been a tonic to our pale and pasty souls. The sun and its heat lifting our spirits in a way that nothing else seems able to do. Now the children are about to embark on the Autumn term of the new school year it seems right that the weather has changed. The rain is befitting of the mood in the Life of Ryrie household, and matches the layered rhythms of Funke and The Two Tone Baby.

Family, Somerset, To do

One thought on “Watch it!”