Farty Towels and Five Top Things to Do in Devon 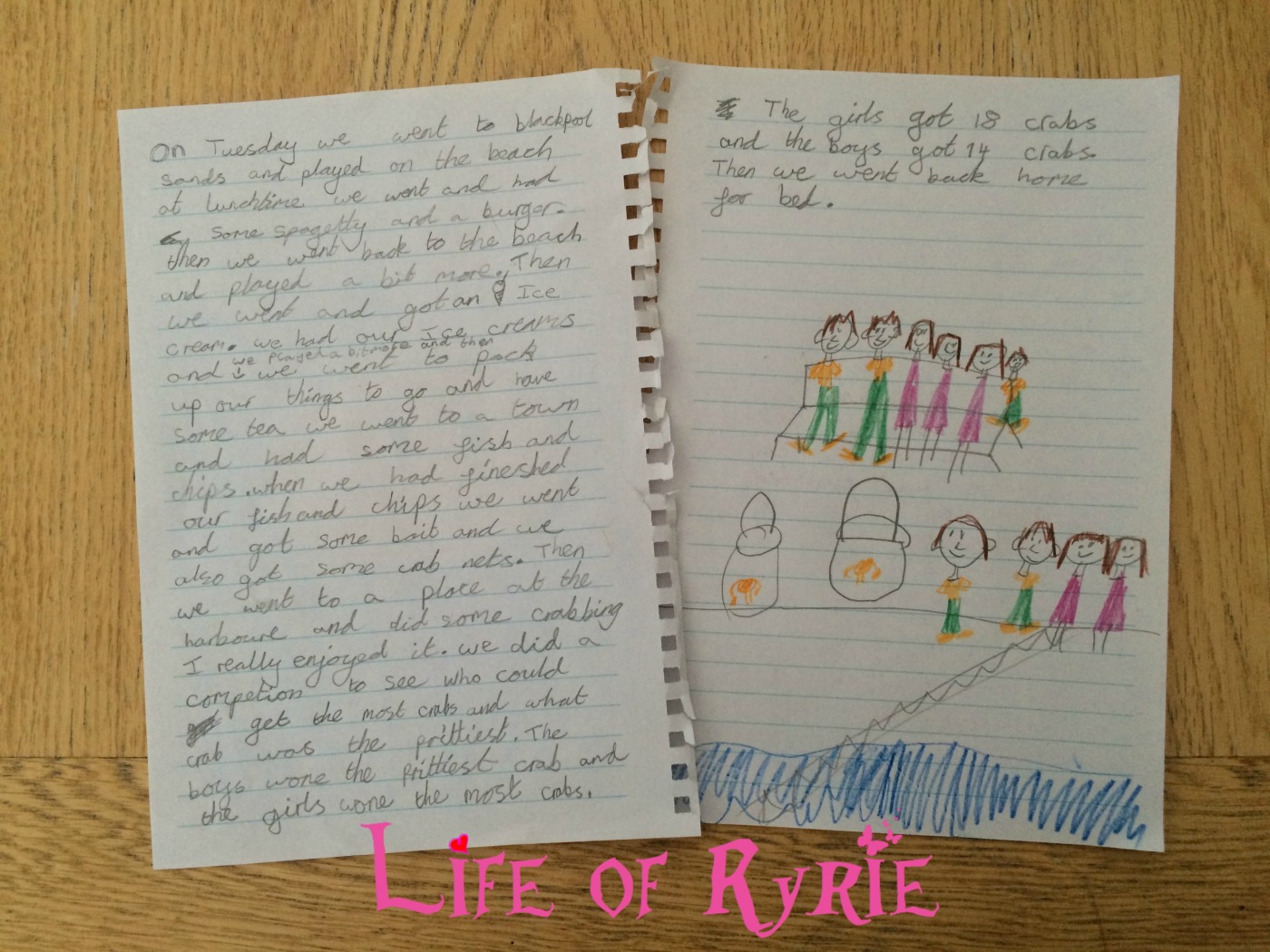 I can’t remember the last time we had a family holiday for longer than a long weekend; Steve’s job always requires him to work during the summer holiday period. Usually we (the children and I) cobble together a few long weekends with Daddy, then lots of day trips and time exploring and making the most of our local area. However it never quite leaves you refreshed or raring to go when we hit September and it’s back to school. What with all the changes that have happened to in the Life of Ryrie over the past couple of years we could really do with ten days of doing nothing other than debate whether to go to the beach or which swimming pool we should frequent. Alas it was not to be this summer.

Instead we found ourselves on a fragmented Staycation with the rest of my family in Devon. Yes, I know. It seemed like a good idea last year when we booked it. Then, when it was too late to change my mind, came the realisation that I would actually be living with my older sibling for a whole week, something we haven’t done since he was 18 and I was 14, but with the added bonus of a wife, a husband and five children between us. Throw Grandma and Grandad into the mix and it seemed like a recipe for, well, I’m not entirely sure.

The ‘holiday’ got off to a rather inauspicious start thanks to illness which meant that J travelled to Devon with my parents whilst Steve, T and I followed a day later. Steve joined us for the first two days and the last two days of the planned seven day break – so that turned out to be another fabulous summer family holiday. Anyway, this isn’t a woe is me post it’s more of a Top Five Things To Do in Devon post.

Our holiday was based just inland from Torquay on the English Riviera which sounds wonderfully exotic doesn’t it? but then you remember that it provided the inspiration for one of the best Sitcoms in British TV history, Fawlty Towers. We were fifty minutes from Blackpool Sands, forty minutes from Dartmouth, twenty minutes to Brixham, fifteen minutes to both Paignton and Goodrington Sands. It was the ideal place for a family retreat. Our top five highlights were: 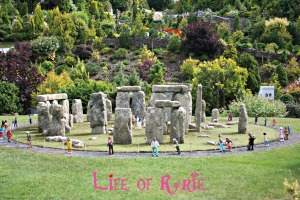 Babbacombe Model Village is just the sweetest way to spend half a day. Essentially it’s a walk round a garden but it’s a garden that is populated with a tiny town and a fire breathing dragon. The attention to detail in the village is simply gorgeous, a tiny Mary Berry presiding over the contestants in the Tiny British Cake-Off Tent, Wombley Stadium hosting the England v Iceland match from this summer’s Euros and even a tiny Tour de France. We were throughly absorbed in our model spotting (the Beatles, Addams Family and various Super Heroes for starters) and passed a delightful afternoon in the village. 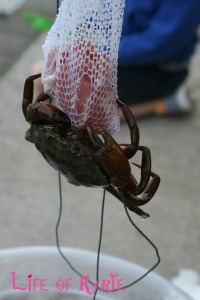 Crabbing, who would have thought that this holiday favourite could quite possibly be scarier than riding the Nemesis at Alton Towers – if you are a parent that is. Your child sits on the edge of a quay and dangles a bit of string over the side, they become massively over excited when said bit of string vibrates which in turn causes a parents heart to flip wildly before lunging to grab a part of the child (foot, hood, pony tail etc) anything which would prevent a belly flop into the river. If you survive that part of the crabbing adventure you then have to reel in the line, ensuring that the prize doesn’t fall off, and then, as if that wasn’t enough, you have to get the crab off the bait bag and throw the line with bag (full of smokey bacon by the way) back into the river to start the challenge all over again. Ok it may not be a Bear Grylls kind of challenge, but it is definitely up there. 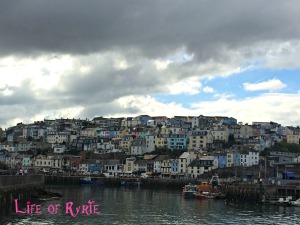 Fishing towns have to be the prettiest places in the world and two of the loveliest must be Brixham and Dartmouth. Think quaint, pastel coloured cottages set into the hillside with harbours full of sailing boats bobbing gently up and down with the tides. (For those with toddlers think real life Old Jack’s Boat). Brixham adds a full size replica of The Golden Hind to it’s attractions and although I’m not entirely sure why it is located in this fishing port. On the outskirts of Brixham is the Berry Head National Nature Reserve which we discovered by chance but then spent a lovely afternoon wandering along the Napoleonic Ramparts and trying to spot dolphins and whales from the cliff’s edge.

Dartmouth is steeped in naval history and indeed is still home to officers training in today’s Royal Navy. It is also home to the Dartmouth Steam Railway and if Agatha Christie is a literary hero of yours you can immerse yourself in the inspiration behind her writing by travelling from Dartmouth to Geenway House (Christies family holiday home) on a steam train. Dartmouth is as picturesque as it is fascinating and is well worth a visit if only to journey across the Dart on the little ferry boat. 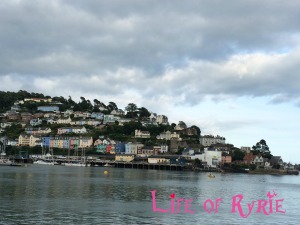 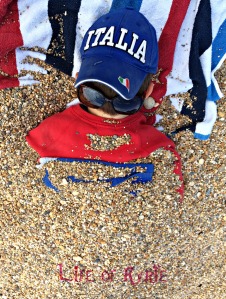 Blackpool Sands is just lovely, it is a gorgeous bay just south of Dartmouth from which you can imagine the Famous Five setting off in a rowing boat to head off smugglers of ginger beer in a nearby cave, but with excellent toilet facilities. However, Blackpool Sands is an oxymoron, it is shingle beach. This is both good: no sand in the pants/sandwiches/eyes, and bad: painful (to say the least) when walking across and no chance of sand castle competitions. The children did entertain themselves with timeless games of Throw the Pebble into the Paper Cup, Bury the Cousin/Sibling and Build a Scree Mountain. With a cafe, huge car park and the availability of a couple of huge sandpits for those yearning for scratchy pants what more could you possibly want from a day at the beach? 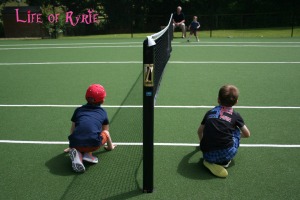 Tennis is not really a Life of Ryrie sport, we’ll watch a bit of Wimbledon but apart from that it hasn’t really been a big hit (ha ha ha) which is why this is a surprising entry to the highlights of our Staycation. My sister-in-law is a tennis person and where we stayed there was a tennis court, so it made sense when she initiated a tournament. Everyone played everyone, and to level the playing field we competed on half a court and served under arm with three games for each match. Suddenly the four year old was leading (ok, he had a few other allowances, but even so), which tested the tolerance levels of the seven year olds, whose competitive spirits were definitely rising to the fore, and everyone was bonding over fluffy yellow balls.

Our visit to Compton Castle almost made the top five and if you are after a slightly eccentric, old skool visitor attraction this is your place. Compton Castle is a National Trust property and is little castle (or fortified manor house) with a heritage in the Gilbert family, a relative of Sir Francis Drake no less. I was rather glad that we hadn’t descended onto the Castle en masse though as I don’t think it could have coped with all eleven of us at the same time. The four of us, however, passed a very pleasant couple of hours hunting for squirrels (a nod to the family heritage what with Sir Gilbert sailing the Squirrel and discovering Newfoundland) and admiring the rose garden.

Devon is beautiful. Rolling countryside, beaches to rival the best in the Med, National Parks, country manors, fossils and quintessentially English villages. Devon connects the English Channel on the South coast and the Bristol Channel on the North, so prevent getting caught in a cow jam, choose your coast and get exploring.