The first time I ever went camping was to Glastonbury Festival with an ex-boyfriend and his mates.  It was an eye-opening experience for the young and innocent 18 year old that I was.

The last time I went camping it was also to Glastonbury Festival: it was the year that Coldplay was headlining (for the second time) and I didn’t really like them much way back then; it was the year that lightning struck the Pyramid Stage and halted proceedings for a matter of hours; the year hundreds of festival goers had their tents and belongings washed away in a scene of devastation comparable only to the Apocalypse (perhaps).  Our tent had only survived as it was pitched on a rather steep incline which meant that the deluge of water raining down on the site simply didn’t hang around long enough to cause a problem.  The steep incline also meant that if you happened to fall asleep (fairly unlikely given that it was Glastonbury Festival) you would most definitely wake in a ball at one end of the tent.

Clearly these experiences have left their mark and whilst I wasn’t an enthusiastic camper before the great storm of 2005, after it I was decidedly anti spending any time in a shelter made of nylon fibres.  Last weekend though, I went camping.

Having returned from Switzerland and settled into rural domesticity in Somerset, I feel that life had become a little, well, *whispering very quietly* boring.  In an attempt to recapture the spirit of adventure we embraced overseas we have bought a tent.  Yes, yes, I know that on the face of it this may not seem particularly adventurous, but think about it.  With a tent, you don’t have to spend the equivalent of a week’s mortgage on hotel rooms.  With a tent you can ‘do’ summer festivals (we’re off to the small, but perfectly formed, Watchet Music Festival in August).  With a tent, there is the ability to jump in the car and just take off somewhere for the weekend and that, my friends, is what I am talking about.  The Spirit of Adventure, right there, in nylon form.

Our first expedition was planned to fall over the last weekend of half term, the campsite was strategically chosen: near a beach, a pitch with a ‘sea view’, toilet and shower facilities close at  hand, a swimming pool and play area, an on site shop for any emergencies.  Most important of all, only an hour from home, just in case…

So in the weeks running up to this trip you’d be forgiven for thinking that we were actually planning an expedition to Mount Everest.  Once the tent had been purchased, there was a dry run of erecting the thing – happily this went well and we managed to achieve full erection within half an hour and with only minor shouting at the children.  Perfect.  We purchased a cute little gas camp stove, kettle (a whistling one like my granny used to have), blow up mattresses, travel pans and a great wind up lamp/radio combo.  The sleeping bags were found and aired.  Supplies were purchased and we were ready for our first family camping trip.

The weather could not have been kinder to us.  Warm, sunny, and above all dry.  After a slightly longer journey than anticipated, thanks to all matter of road related issues, we arrived at the lovely Home Farm Holiday Centre in time for our packed lunch.  The site wasn’t so much a camp site as a motor home/caravan site, the number of pitches available for tents was actually rather limited.  Not that this was a negative as it meant that the number of people using the toilets and showers was also limited.  Our pitch was great, a short walk to the loos and, yes a view of the sea – just.  We got the tent erected and mattresses blown up inside an hour and once the children had made their bedroom as cosy as possible we set off to find the beach.

Home Farm Holiday Centre is set in beautiful West Somerset in the Quantock Hills with St Audries Bay on its door step.  A short walk down a windy path and there was the Bristol Channel stretching out before us with views over to Barry Island and South Wales (if you had binoculars with you that is).  When we arrived at the beach the tide was out and so there was a long stretch of sand in front of us – not soft tropical sand but wet squelchy sand – perfect for castle building had we had our buckets with us.  Around the edge of the bay are cliffs and rocks containing plenty of fossilised delights, quartz and gypsum, and the area forms part of a Site of Special Scientific Interest.  Be warned that the tide comes in very quickly and had we not been aware of the turn we could have rapidly got into difficulty. 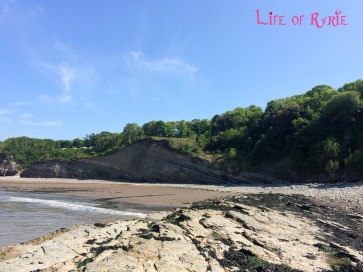 Once we had exhausted enthusiasm for fossil hunting we headed back to camp and then out for dinner at the Marina in Watchet.  Fish ‘n Chips from The Harbour Fish Bar were scoffed from the paper whilst sat with Yankee Jack on the Esplanade before we headed back to Home Farm with a cider and high hopes for a good night’s sleep.

Oh my.  As soon as I crawled into my sleeping bag, on a mattress that bounced me a foot into the air every time Steve moved a leg, I was reminded of precisely why I wasn’t particularly keen (perhaps an under statement) on camping.  Being at one with nature is all very well but, seriously, crows in the trees that chattered ALL night.  The shift in temperature from stiflingly hot to totally freezing in a matter of minutes.  The realisation at two in the morning that you really need to go wee but don’t want to wake anyone and are actually a bit scared to go on a nighttime trip to the toilet block.  Then there’s the early morning alarm clock at 5am – after you finally managed to doze off around four – when the crows start again and T gets up because she is desperate for the toilet.  The painfully slow unzipping of the  inner sheet on the sleeping compartment, then the outer sheet, then zipping both of them back up.  Then the individual unzipping of both the exits for the main tent, then zzzzzzzzzzipppp, they are both closed with the whole exercise repeated when she returned from the loo fifteen minutes later.  Good Morning Ryries! 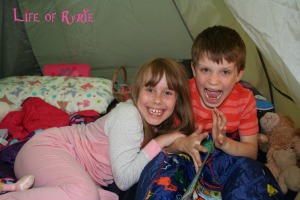 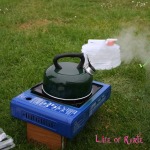 Steve tells me that our mistake was only to go for one night – apparently you sleep much better on the second night.  Yes, because you are SO exhausted from the first night you sleep through ANYTHING the next.  However after our one night in the tent we brewed a hot cup of tea, cooked our bacon on the little stove and congratulated ourselves for lasting the night.  Whilst we sat nursing a lovely hot brew, sat in our fold up chairs looking out over the Bristol Channel, suddenly all was right with the world.  Maybe we would do this again.

2 thoughts on “Carry On, Campers”