I love Carnival.  I suspect that the word ‘Carnival’ has conjured up images of feather clad women shaking their booties to a heavy samba beat and that’s why you’re nodding in agreement.  Actually, Somerset Carnival couldn’t be further from this.  The Carnival I am actually talking about is a procession of decorated tractors in November, which, let’s be honest, isn’t that conducive to feather bikinis.

The Somerset County Guy Fawkes Carnival has it’s origins rooted in the Gunpowder Plot as it began following Guy Fawkes Celebrations in the 19th Century.  The Carnival we see today is a distant relative of the tar barrel burning celebrations of yesteryear but it is very much part of our regional identity and heritage.  Bridgwater hosts the largest illuminated carnival in world on the first weekend of November each year.  As a family we have always supported the last procession, Glastonbury, staged three weeks later.  The weather is cooler, the night is darker (all the better for the dramatic illuminations) and it marks the start of our festive celebrations.  Last year we missed the event what with being in Switzerland (although Fasnacht was a reasonable substitution), so this year we were delighted to stand in the cold for a couple of hours and watch the spectacle.

I can tell you are a little sceptical about the whole thing, so let me try to convince you that it is quite possibly the most eccentric, eclectic and inspiring event in the Somerset Calendar.  The imagination and talent that goes into the creation of each float is A-mazing.  Even the basic logistics are pretty incredible when you understand that some of the most major roads through some of Somerset’s largest towns are closed for around 12 hours just to stage the event.  Then, throw in the fact that it’s FREE entertainment and I think you’ll start to be persuaded.

The floats are, quite honestly, awesome.  Yes, essentially they are glorified tractors and trailers and no, they really don’t sound like much do they?  But imagination, mdf, paint, and a couple of hundred lightbulbs all combine to create something wonderful.  Locally there was general dismay when the government decreed that only energy saving bulbs could be sold in the UK simply because of how it would affect the Carnival (to be honest to my untrained eye I haven’t noticed much difference).  Many of the Carnival Clubs started stockpiling bulbs and appealing for bulb donations to ensure that they had stocks to last.

Let me marvel just for a moment on the wonders of the construction of these floats.  To power these creations they have a massive generator on the back, the driver at the front usually has to negotiate tight corners, sleeping policemen and mini roundabouts in order to get these giants up the high streets that form the procession route.  Practically and logistically it is a huge feat.

Then let us consider not only the man hours that are put into the construction of each float but also the teams of people that get on these floats.  They are travelling entertainers – they dance, they sing, they come together and create a spectacle in just a few feet of incredible moving set.  Admittedly a lot of the floats feature the British favourite – men in (bad) drag but many also host groups of children, teenagers, grannies and granddads who all dedicate the month of November to travel the length and breadth of Somerset as part of the Guy Fawkes Carnival Circuit and bring excitement and wonder to its residents.  Some of these floats are tableaux meaning that the people on them have to stand still, in pose for the duration of the procession.  This could be for up to 3 hours!  In the cold, on a jolting trailer.  They have to be chained onto the float or stand in a safety circle to ensure that they don’t fall off.  If they are dancing they have to withstand the onslaught of the chosen song over, and over, and over, and over, and over… whilst repeating their synchronised dance moves, and smiling!

I can tell you are still not convinced.  So here are a few photos from Glastonbury Carnival this year… 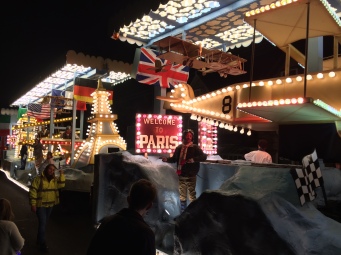 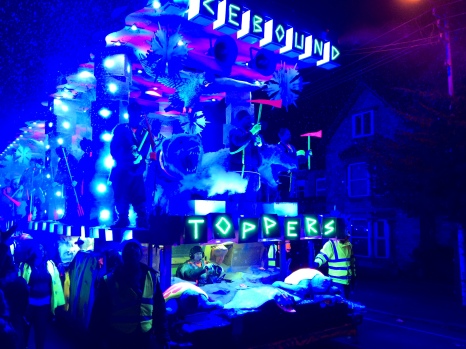 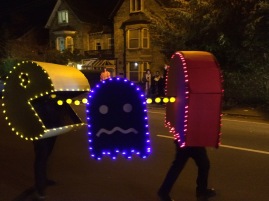 Now are you convinced????

Disclaimer – I received no money, or product, in exchange for this article and all opinions are my own.

Family, Somerset, To do