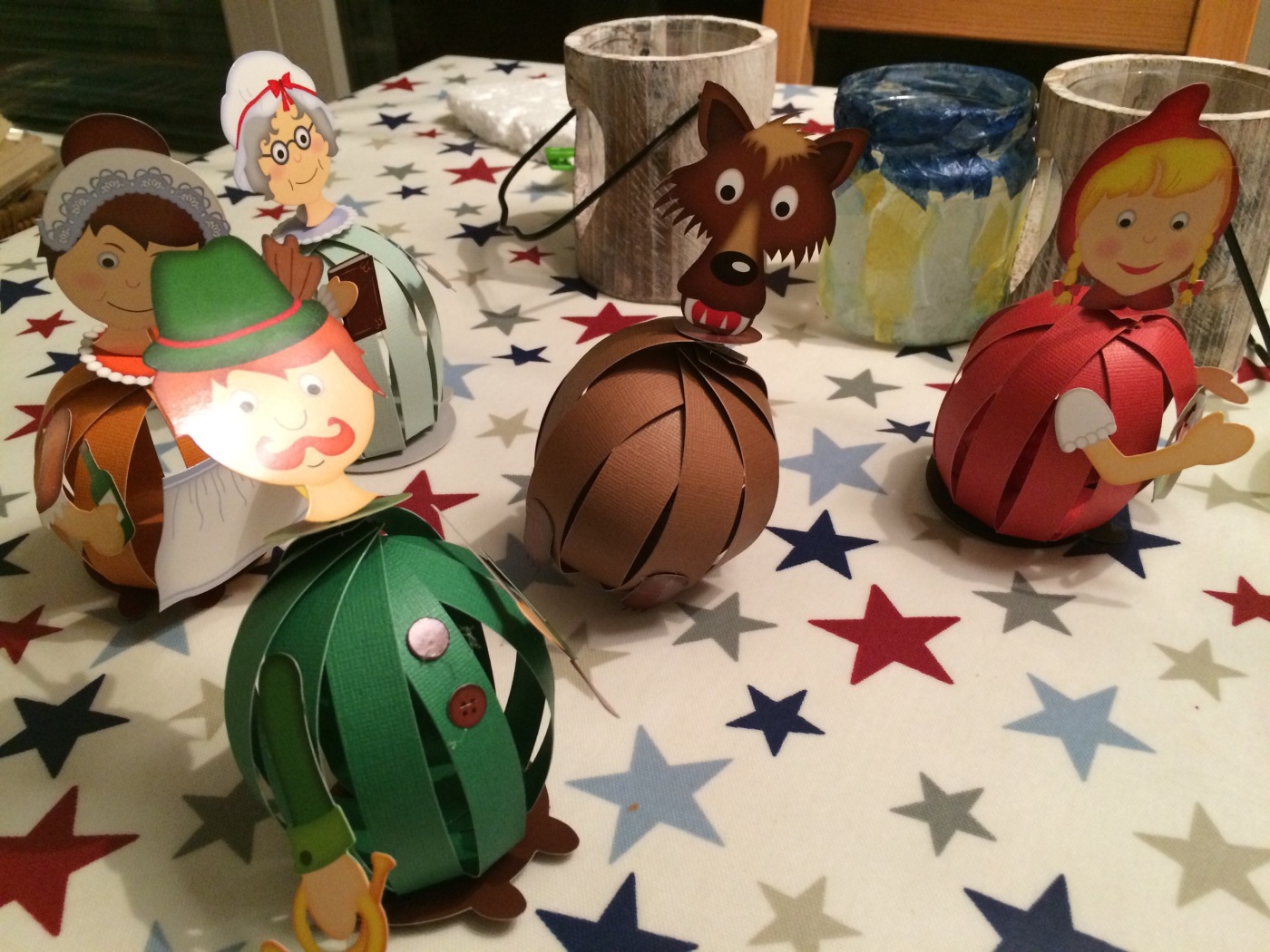 T was home poorly yesterday and it was a perfectly lovely day.  I fear that this statement may need a little further explanation, I am not, I assure you, some sadistic woman that takes pleasure in their child’s suffering!  T was poorly enough to be home from school (the yardstick always being whether the child has a temperature higher than normal combined with some other symptom from the pick n mix of childhood ailments) but not so bad she was confined to bed.  So our day went something like this; we took J to school, popped into the supermarket to get provisions, got home, had some late breakfast, went to bed and had a nap (the napping part was me, T just lay there and wriggled), got up and FaceTimed Grandma, tried to eat some lunch (managed about half), did a bit of maths, and finally made some paper Little Red Riding Hood puppets before once again returning to school to collect the boy.  See what I mean, perfectly lovely.  A bit of craft, a bit of sleep, a touch of socialising – all interspersed with bouts of hacking coughing, headaches, nausea and, of course, the fluctuating temperature.  However this I could handle.  T was, despite clearly feeling absolutely dreadful, in her element.  I mean she had one on one, dedicated mummy time.  Precious time indeed.  Just a pity that this time had to be given in such miserable circumstances.

It started to go horribly wrong as soon as we picked up J, who looked about as grey as the John Major Spitting Image puppet – yes, that grey.  “Mummy, I’ve got a really bad headache.”  That was all it took for the next 24 hours to turn into an episode of Casualty.  I am typing this feeling as though I have just completed 24 hours in A&E.  Seriously.  J has given me most symptoms from the said headache ranging from light sensitivity, throwing up, dizziness, nausea and of course the fluctuating high temperature. Now, this might be ok with just one child at home but add in T who was still not well enough to return to school, and still suffering from the hacking cough, the temperature and fatigue thanks to not sleeping for the last three nights.  Finally throw in a grumpy mummy (not sleeping longer than 90 minutes at a go over the past three nights thanks to a relay between the patients being the cause) and you have some idea of where we have been today.

I have to admit that I am a terrible patient and so I guess that it would follow that my children would also be hanging on deaths door for a slight sniffle.  Now combine that with the fact that J is male(!) and that we have no support network (what with being only five months into our Big Adventure, and me being really bad at that kind of thing) and you’ll have some understanding of where I am coming from. I mean, at one point he was lying on the sofa moaning randomly when all of a sudden I hear him yelling, “it really hurts. Ow. It really hurts.” I rushed over and after five minutes of this and my desperate questions to establish what was hurting so badly, all the while wondering if we should get the local hospital, J finally stammered out, “my knee, my knee really hurts.” Life threatening? I think not.

The good news, however, is that T should be well enough to return to school tomorrow.  But please, keep everything crossed that there aren’t any last minute vomiting sessions as we walk out the door.  24 hours in Ryrie A&E is more than enough.