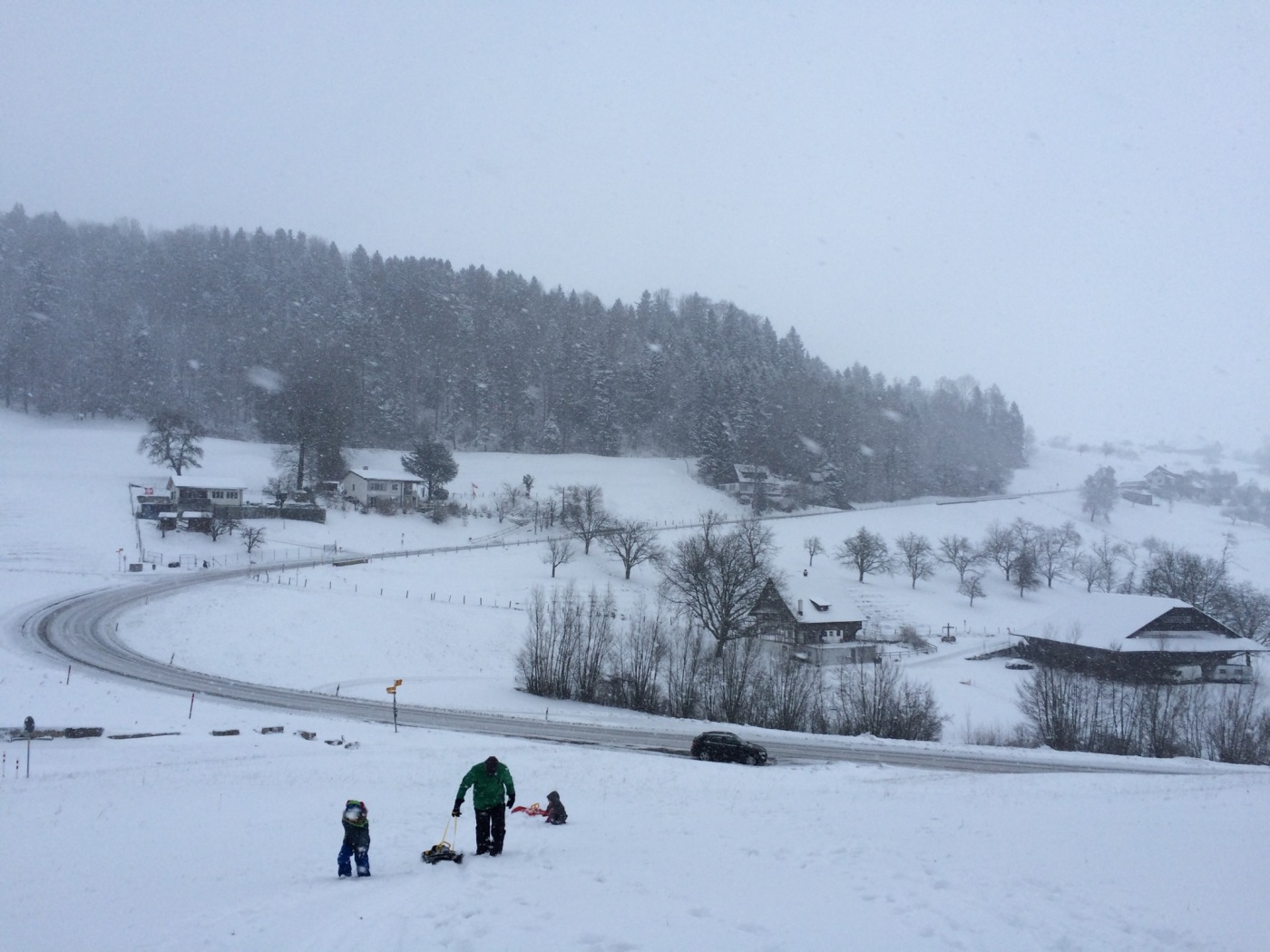 I can’t believe we’re in Switzerland and it’s raining on Christmas Day. Where’s the snow for goodness sake?

It’s not been so much ‘do you want to build a snowman’ as ‘let it go’ as we stay inside and pretend to build one with the Elsa and Anna dolls that we finally managed to purchase for T’s Christmas present (only a year on from being asked for them!). 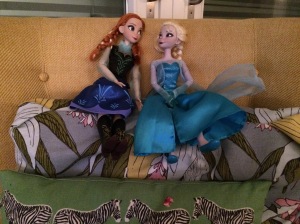 It appears though, that the Alpine Gods have been looking down on us and have taken heed of our pleas.  Five days ago it started snowing and it is still snowing as I write this.  We are nestled under a downy blanket of silver and white crystals.  I haven’t seen so much snow for years, if ever (such as my life has revolved around milder, rainier climes). 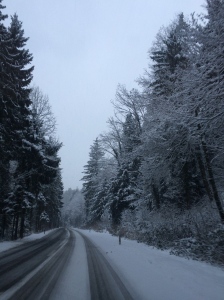 This snowfall is remarkable to me in a host of ways not least because the country is still functioning.  The roads are clear – even the pathways are cleared by a mini snowplough, and even the school has its own – the electricity is still working, no one has been stranded in their car for the night.  If this quantity of snow had fallen in England the country would grind to a halt, schools would close, politicians would talk about the loss to national productivity.  We’d all be dashing out to bulk buy tinned vegetables, bread, milk and candles due to the conviction that deliveries would not be made to the supermarkets and thus we would surely all slowly starve to death in our dark wintry wilderness before the thaw arrived.  Even now I feel the panic rising and am wondering if we have enough tinned carrots, just in case.  Just in case of what I’m not entirely sure.  The Swiss can definitely ‘do’ snow.

The last five days have highlighted to Steve and I just how woefully unprepared we (i.e. the English) are for this extreme weather.  I might just as well be Elsa in her skimpy Ice Queen dress for all the good my ‘sensible’ winter coat and boots do me – unlike Elsa though, the cold definitely does bother me.  As a child, with a congenital heart defect, I never went sledging with my brothers and if I did venture out into the garden to build a snowman I very rapidly returned to the warmth of the kitchen with blue lips and frozen toes in tears from the biting cold that seeped into every bone of my body.  So, despite the purchase of salopettes and down filled jacket, I was fully expecting my Swiss winter adventures to be limited to the indoors.  How wrong can you be.

As soon as the first snowflake fell on Saturday the children were beside themselves with the urge to get out and give their shiny new sledges a run.  However, due to lack of ground cover this urge could not be satiated until Sunday whereupon we donned our new winter performance gear along with hats, gloves, scarves and the obligatory two pairs of socks and off we set to find a slope steep enough to provide the children with a natural track suitable for the luge championships that they seemed intent on recreating.  Living in Steinhausen there appears to be a dearth of steep slopes so off we set to Baar and parked up next to a field that, on a clear day has spectacular views.  Unfortunately the sky was leaden with unshed snow so the view was particularly UNspectacular, but it would provide us with a slope steep enough and long enough to be good enough for our first Swiss sledging (or sledding or tobogganing).  With beautiful, powdery, virgin snow in front of us and coming up to our knees, off we set up to the top of the slope. 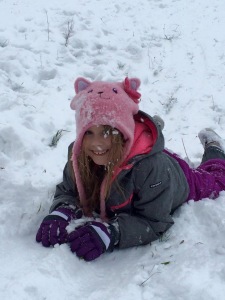 I was fully expecting to be sat back in the car within the first 15 minutes, chilled to the bone and wishing I hadn’t attempted to set forth on this totally impractical task of keeping up with the children.  I was telling T, every time she fell (every five minutes it seemed) not to sit in the snow as the longer she sat in it the quicker she’d get cold, I felt like we were Anna and Kristoff trying to get to the top of the mountain.  We got there and Edmund Hillary couldn’t have been more delighted.  J made the first run back down – more like a snowplough than a bobsleigh granted but we did have our first run.  Steve went off to collect J and made the second trip up the slope before T and I set off as a tandem.  I never thought of myself as a screamer and I had always wondered where T got it from, well now I know!  I was exhilarated, scared, and screaming madly as we hurtled down the slope.  No wonder my brothers had spent hours doing this when we were kids.  It was SO MUCH FUN!  Even more amazingly I was still warm, and an hour and a half later I was still with them and my toes were as warm as hot coals! 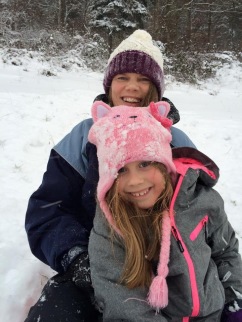 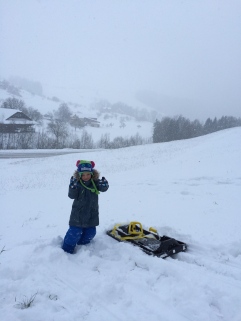 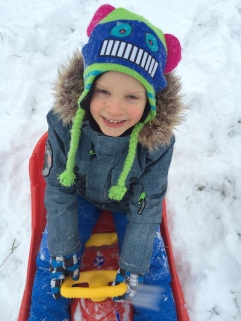 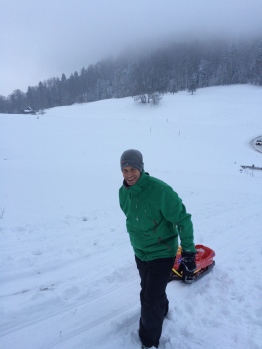 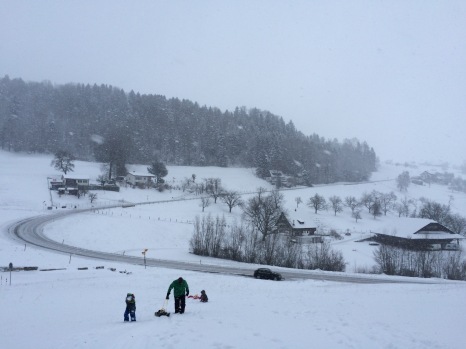 Until this point the thought of skiing has filled me with some trepidation.  We have done our research, we know it is expensive, we also know that it would be flipping cold and it was that which bothered me.  What if I couldn’t last the time that was needed to learn to ski in the freezing mountain air?  What if all the money we spent was wasted by me having to return to the comforts of the Apres Ski long before even the basics had been mastered?  Well this simple afternoon of family sledging has put paid to these fears and has allowed me, in some small way, to ‘let it go’.